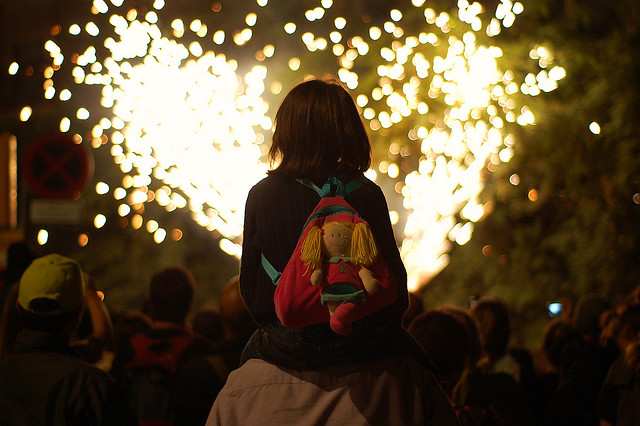 Guestblog by Emma from iwant2go2spain.co.uk

I visited Barcelona in September 2010 last year, my first visit to this wonderful city. I travelled with friends and stayed in a lovely apartment in the Eixample area of Barcelona which is full of long & broad streets, bars, cafes and Barcelona culture and people. It was fantastic.

We were lucky enough to come during the incredible La Mercè, a yearly festival that is held in Barcelona during September in honour of the patron saint of the city. Throughout this long weekend everyone in Barcelona gets involved with various events, street carnivals, concerts, shows and music all over the city. As well as the main advertised activities that take place as part of the schedule, there are also smaller local events that take place in the residential areas, such as local squares.

Barcelona was very busy the weekend I visited, partly because of the festival and the number of tourists it attracts but also because it seemed that a lot of residents had taken time off work to also enjoy the festivities of the bank holiday weekend! Unfortunately I was only in Barcelona for the weekend so I didn’t spend the whole weekend attending the festivities of La Mercè. We also wanted to explore the other aspects of Barcelona such as Gaudi’s work, the beach and the many restaurants and bars. For me the highlights of the La Mercè festival that we experienced were:

Fire Run (Correfoc) – This started earlier on in the day with the assembly of some gates and a large dragon figure, I think symbolising the gates of hell. Once it started to get dark the festival procession started and lots of people were in fancy dress, especially as devils. There was even a dragon figure that starting running along the streets with fireworks and sparklers! The sparklers were strapped to it so it looked like it was breathing fire! If you don’t like big bangs and fireworks then avoid this part of the festival, otherwise it’s a great atmosphere and very lively, just be careful to avoid getting too close to the fireworks and sparklers.

Music Concerts and Fireworks – There was a huge emphasis on music at La Mercè the year I visited. There were concerts happening everywhere including in our local square near to where we stayed in the Eixample area. They laid out a small stage and plenty of chairs and played Jazz throughout the day, it was fantastic. The local residents all sat and watched and stood around the stage, it was very busy and there were some wonderful musicians playing. I really enjoyed seeing the involvement in La Mercè at a local level like this as it gave you a real feeling for the culture and personality of the people of Barcelona. Everywhere you went to in Barcelona over the weekend of La Mercè was influenced by music. We walked down to the beach and through the Marina Port Vell where there were bands of musicians playing in the street celebrating the festival and people dancing in the street to the music. There were also many stages erected throughout Barcelona in various squares with music concerts throughout the day and evenings including shows in the day aimed at children and families.

As well as the local concerts and shows throughout the city, there was also a huge concert held in the evening including fireworks. There were different companies producing the fireworks all competing to be the best. It was an amazing show which I’d love to see again.

Drum Procession – There are many processions taking place during the weekend of La Mercè but the one I loved most was the procession of all the different drum bands. It was very loud but fantastic as each band or school of drummers walked and danced along the street, often dressed up or in t-shirts relating to La Mercè. It went on for hours and the atmosphere was fantastic.

I loved every minute of my visit to Barcelona, especially during La Mercè as the atmosphere was so lively and friendly. For anyone thinking of visiting, whether for a last minute holidays or a short break, I’d recommend to tie it in with La Mercè as it gives you an authentic feeling for the city and the wonderful, passionate people of Barcelona.