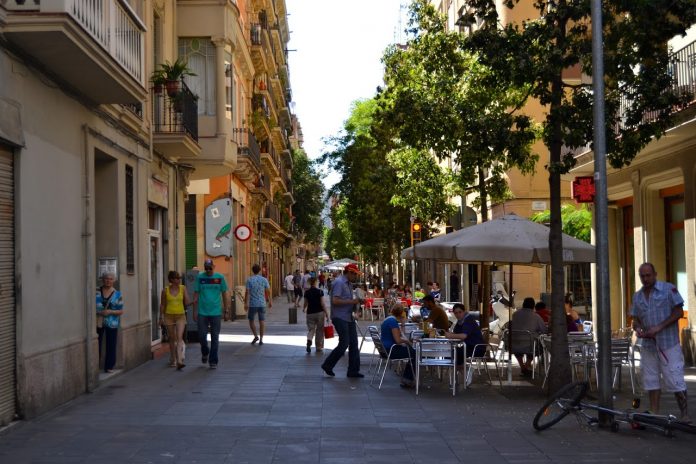 When people visit Barcelona today, they arrive in a sunny city where life seems to have a slower pace compared to most western cities; where mañana has become one of the most important Spanish words to know, and where everything seems to be relaxed and peaceful. At the end of 1936 this was certainly not the case: at that time there was a civil war in the city between communists, socialists and Franco´s fascist regime, and it was precisely this that drew author George Orwell to Barcelona.

George Orwell, born Eric Arthur Blair, was born to a middle class family in India during the time of English imperialism. Later, he returned to England with his family, where he developed a sympathy for socialism. He frequently visited the poor neighborhoods of London and Paris to work on his first novels among the poor.

At the end of 1936 Orwell took off to Barcelona to report on the civil war. Right after his arrival he became deeply impressed with life in the city. Even though everything was very poor, there seemed to be no class differences. The socialists were popular and everyone was more or less equal. In England he had sought this, but without success, due to the fact that the socialist parties mainly consisted of middle class people.

Almost directly after his arrival Orwell joined the POUM, a Barcelona-based socialist party. He wanted to fight for what seemed to be possible here, a life without class differences, and against fascism. On the wonderful hill of Montjuïc, where nowadays we can enjoy the parks and views, he was given basic training in the so-called ´Lenin barracks´, only to be sent out to Aragon afterwards to fight. There the front was calm and quiet, and in fact it was his intention to join another group closer to the action in Madrid. Unfortunately he got shot in the throat before this could become a reality, and he had to return to Barcelona.

When he returned to the city Orwell´s view on things had completely changed. The civil guards had returned and once again big class differences had arisen. The POUM fell apart into different fractions in the meanwhile, and were accused by the communist press of collaborating with Franco´s regime. Because of this, Orwell was forced to live on the street and he had to go into hiding until he could finally escape the country with his wife.

Although his time in Barcelona didn’t turn out the way Orwell had hoped for, he had experienced a glimmer of hope that a life without class differences could truly be possible. He wrote down his experiences and discoveries about the Barcelona of that time in his book Homenaje a Catalunya or Homage to Catalonia. Next year, this book will be turned into a movie with Kevin Spacey and Colin Firth.

Nowadays in Barcelona the Plaça de George Orwell can still be found, also being known as Plaça Tripi. In this square there are many small restaurants and bars, making it a popular place for young people and a notorious one amongst locals.

Books set in the city of Barcelona