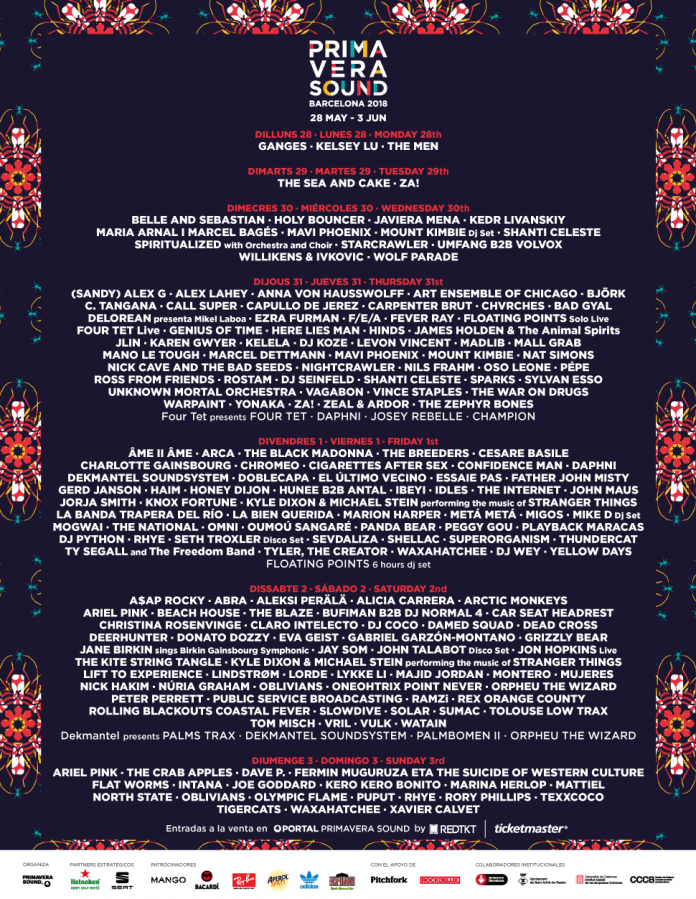 Spring is here, and, with the good weather, all outdoors music events come to Barcelona. You may be quite busy among all the Brunch in the park events that take place in the weekends, but you should save some energy (and money!) for the many wonderful festivals that are celebrated during the summer. The first one is Barcelona’s most popular, Primavera Sound, which is celebrating yet a new edition with the most eclectic line-up in the country. The numbers of Primavera Sound are astounding, and even though there are still some mysteries to be revealed for this year’s edition, last year’s speak for themselves: over 200 bands, over 200.000 people attending and over 10 stages – and that just in the Parc de Fòrum, its main location, not counting the other stages located around the city. All that, plus the undeniable quality of its line-up, makes Primavera Sound one of the most ambitious festivals in Europe. And the best one to start festival season!

But what to see in Primavera Sound? That’s always a bit of an issue for everybody who goes, as the wide offer forces us to make some hard choices. However, the festival is all the more enjoyable if you know the line-up a little bit, so we’re going to tell you what is, for us, the best of Primavera Sound 2018. Get your Spotify ready!

Best of Primavera Sound 2018: The headliners

What makes Primavera Sound one of the greatest festivals in Europe is the variety and eclecticism of the smaller names in the line-up – that is also how the festival has managed to get a very loyal audience in the city. However, as any good festival, it also has a few big names worth considering. These are this year’s top headliners:

Best of Primavera Sound 2018: The alternatives

As we were saying, the smaller names in the line-up have made Primavera Sound the great festival that it is… And this year is no exception. Besides enjoying great music, seeing the less known bands also guarantees you a spot in the smaller but more comfortable stages – it’s worth moving a little bit instead of staying always in the crowded area where all the headliners play. Prepare for wonderful names such as Panda Bear, The War on Drugs, Mogway, Lykke Li, Ty Segall or Charlotte Gainsbourg. The fans of electronic music will be able to enjoy Four Tet, Lindstrom, Floating Points, James Holden & The Animal Spirits or John Hopkins (take a look at the Primavera Bits line-up!).

Best of Primavera Sound 2018: Some great concerts for free

Primavera Sound isn’t the cheapest of festivals, but it always comes with presents for the locals of Barcelona thanks to its ‘Primavera a la Ciutat’ (that is, Primavera in the city). This includes several gigs in Barcelona’s Sala Apolo and La (2) de Apolo, as well as in the Auditorium of Barcelona. However, the events at those spaces are also exclusive to those who’ve bought the ticket. The most interesting part of Primavera a la Ciutat is… the free concerts! The opening act of Wednesday 30th of May in Parc del Fòrum is completely free (except for the two concerts that are celebrated in the Auditori del Fòrum), and this year the party is brought to us by bands such as Bell and Sebastian or Wolf Parade.

But there is more: for the third year in a row, Primavera Sound has a present for the festival-goers that never have enough, and for all those who couldn’t afford the festival ticket. The Parc del Fòrum will close its doors on Sunday morning, but on Sunday afternoon the party will continue in the centre of Barcelona thanks to Primavera al Raval, which is celebrated in CCCB. A free mini-festival with Rhye, Waxahatche, Fermin Muguruza or Tigercats, among many others.

So, are you ready for Primavera Sound? It’s the first, but not the last, of the many great music festivals you can attend in Barcelona during the summer. In fact, the city has so much to offer that you could enjoy the whole festival season without leaving. Next one? Sonar!

Here you have our best accommodations to spend a few days in Barcelona and enjoy the Primavera Sound Festival. Click here.