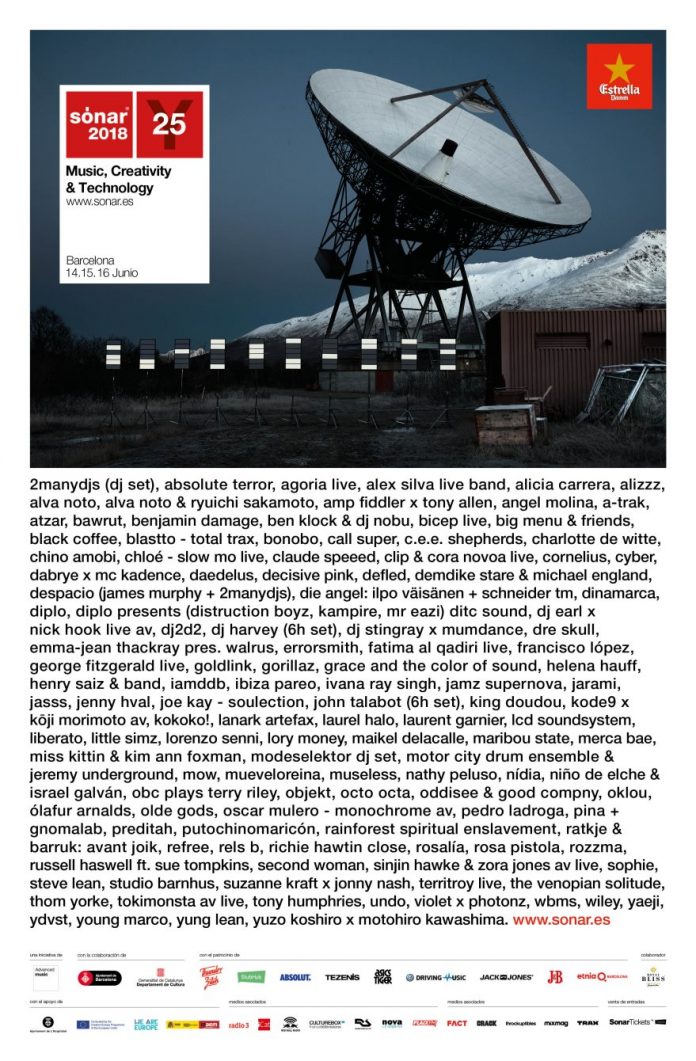 Summer is a busy time in Barcelona – even before it starts! June is still officially a spring month, but those who live in Barcelona know very well that in this beautiful city, June feels like summer. Those who organise the events know it too, and festival season starts pretty early in the Catalan capital. In the last days of May and first days of June, locals and visitors can enjoy Primavera Sound, the most eclectic and probably most ambitious festival in the country, and one of the best in Europe. But those who aren’t new to Barcelona’s festival season save some energy and some money for the second round, which takes places two short weeks after. We’re referring, of course, to one of the most prestigious electronic music festivals in the world, Sónar, which this year celebrates a very special edition: it celebrates its 25th anniversary!

Sonar started in 1994 with the subtitle ‘Festival de Música Avanzada y Arte Multimedia’, that is, Advanced Music and Multimedia Art Festival, which says a lot about its spirit, that ambitions going beyond music and reflecting, during the three days it lasts, the best of electronic culture and creativity. That ambition and spirit goes deeper than in many other festivals, and doesn’t settle for a couple of interesting art projections. Since its beginnings, Sónar has organised a sort of parallel festival for professionals related to the festival themes, such as recording companies, video artists, filmmakers and sound artists. Nowadays, this parallel festival is called Sonar+D. The festival sells delegate passes that include an entry to all the Sónar by Day shows.

And that’s the other defining characteristic of this wonderful festival. Two atmospheres, two settings, two festivals in one: Sónar by Day and Sónar by Night, and you choose which one you’d rather enjoy – that if you don’t decide to enjoy both of them, which is also possible. Sónar by Day is a bit cheaper and takes place in Fira Montjuïc, right next to Plaça Espanya, while Sonar by Night takes places in a bigger place in Fira Gran Via.

But let’s talk now about the acts, which are still the main attraction of this wonderful festival that attracts a wide audience from all around the world. We’re going to explore the best of both Sónar worlds – Day and Night.

There are many famous names in the electronic world in Sónar by Day 2018 – Laurent Garnier, and old friend of the festival, will play on Thursday (and also on Saturday night!), as will Monochrome, Absolute Terror and futurists Sinjin Hawke & Zora Jones. On Friday it’s almost mandatory to see Ólafur Arnalds, Alva Noto and national star Rosalía, a cantaora that will surprise us with something very different from what she usually does. On Saturday, our favourites are Second Woman and unique Maribou State. Special mention to the super collaboration DESPACIO, which brings together 2manydjs and James Murphy in a unique experience where the stage is on the dancefloor thanks to a circular sound system – they play all three days of Sonar by Day, so missing it would be almost a crime!

Sonar by Night comes with the big names, so get ready for an amazing line-up where there is much more than electronic music. Gorillaz, Diplo (who plays also during the day), Modeselektor, Bonobo and Dj Harvey make for an unforgettable Friday night, but Saturday is no worse: LCD Soundystem, Laurent Garnier, Richie Hawtin Close, Benjamin Damage, John Talabot… And Radiohead’s leader Thom Yorke himself!

This year there are two special nights for Sónar fans, and they are indeed for the fans (or for those who haven’t recovered yet from Primavera Sound and can’t make it), as they’ll have to purchase special tickets not included in the full festival pass. On Thursday night the Barcelona Symphony Orchestra and Brad Lubman will play Terry Riley’s iconic IN C, a key piece in minimalist music. On Sunday, the closing act will be performed by two amazing artists in a duet, Alva Noto & Ryuichi Sakamoto, who will offer an unforgettable performance and not just thanks to their amazing music – the setting will play a part as well, as it will be celebrated in Barcelona’s amphitheatre, the Teatre Grec. There is certainly no better way of putting the cherry on top!

So this is the best of Sónar 2018 for us – have we missed something? Which artist are you most excited to see? Tell us all about it in the comments section!

Take a look at all the acts and plan your visit to Barcelona for the Sónar. You will find our best offers in accommodation by clicking here.

The best sandwiches in Barcelona