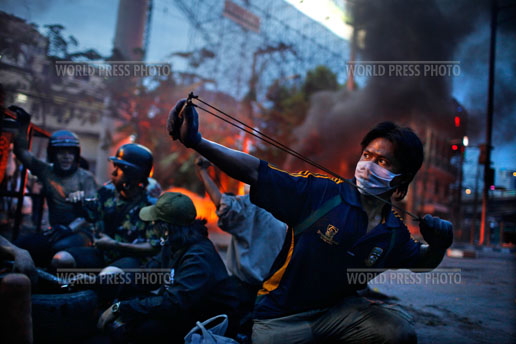 Where? Barcelona’s Centre of Contemporary Culture
When? 23 November 2011 – 18 December 2011
For who? Anyone interested in photography, world affairs or breathtaking images

The Contemporary Culture Centre of Barcelona takes its turn at hosting the World Press Photo exhibition. Regarded as the world’s most important display of photojournalism, the award-winning snaps appear at galleries and art centres in some 100 cities worldwide.

What is World Press Photo?

‘The photo was of a motor-cross competitor taking a tumble from his motorcycle. The date, 1955. The award, the first World Press Photo of the year.’

Founded in 1955, World Press Photo is an independent, non-profit organisation known for organising one of the world’s largest and most prestigious annual press photography contests.

World Press Photo is deeply concerned with stimulating developments in photo journalism and encouraging knowledge transfer – organising the annual Joop Swart master class as well as seminars, workshops and other educational projects all over the world.

Each year the contest’s prize-winning photographs are assembled into a travelling exhibition that is visited by over 2 million people. The tour currently visits 100 cities in 45 countries and is still expanding. The show attracts a broad public and because of the wide ranging focus of its content, provides an eye witness record of world events from the previous year, a sort of visual time capsule. A yearbook presenting all prize winning entries is published in 6 different languages.

Expect the photos to make shocking and poignant political statements, as well as offer up unexpected moments of beauty in sport, nature and daily life. Some of the photos have become iconic; others have set trends and established styles of press photography that will be seen re-emerging in years to come.

This year, the exhibition also includes two workshops with two of last year’s winners – Jodi Bieber, the overall winner of World Press Photo 2010, and Walter Astrada, the winner of the Spot News Stories category. These workshops will take places on the 21, 22 and 23 November.

Jodi Bieber is a South-African photographer; she has already won several previous World Press Photo competitions. Bieber was also the winner of the 2009 European Union prize, as well as the ‘Picture of the Year Award’ in her category.

Walter Astrada is an Argentinean photo-reporter, who has won around twenty prizes in these past two years. His list of prizes is pretty impressive and includes the World Press Photo of 2009 and the ‘Picture of the Year Award’ prize in his category.

The contest & the awards

The annual World Press Photo contest is the core of the organisation’s activities.

It offers an overview of how press photographers tackle their work worldwide and how the press give us the news, bringing together pictures from all parts of the globe to reflect trends and developments in photojournalism.

Judging takes place at the beginning of February each year. The contest jury is comprised of picture editors, photographers and representatives of press agencies from different parts of the world, with widely divergent backgrounds. This brings to the process a breadth of experience, a variety of perception and a contrast in viewpoint that keeps the judging dynamic and bolsters objectivity.

Entries are judged for their news value and on the photographer’s creative skills. All together there are eleven competitive categories including: news events, current affairs, sport, arts and entertainment, portraits and nature.

The overall winner of World Press Photo of the year is awarded 10,000 Euros for the single photograph that is not only the photojournalistic encapsulation of the year, but represents an issue, situation or event of great journalistic importance, and does so in a way that demonstrates an outstanding level of visual perception and creativity. The golden eye has come to be regarded as the most prestigious international award for photojournalism in the world.

Have you been previously to a World Press Photo exhibition? What did you think? We would love to hear from you!