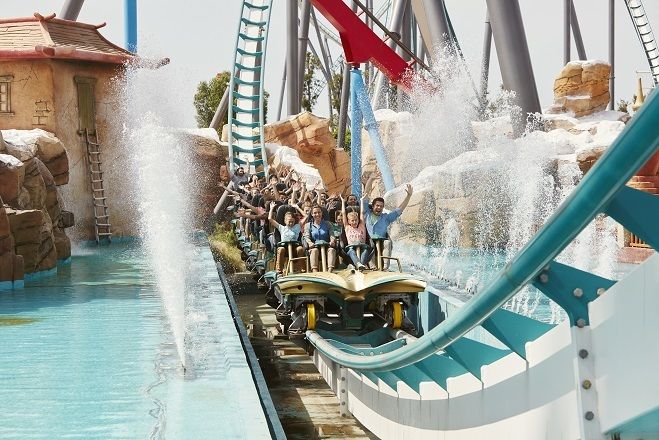 It’s Sunday morning, 8 o’clock, and the alarm goes off: today the kids are coming back!

All together at Sants’ station (the main station in Barcelona), we have a look at the times, our destination being Port Aventura , Barcelona’s theme park and comparable to Thorpe Park or Chessington World of Adventures in Britain. Much to our surprise, we discover that there is a train every hour, something very important given the number of people heading there, which allowed us to avoid being packed in on the train. The ticket costs €15.40 (return), and, after travelling for roughly one hour and ten minutes, watching places like Sitges and Castelldefels rush by the window, we finally arrive to our destination.

We arrived at a “non-station”, as the train actually stops in a rather isolated spot, although the entrance to the theme park is a more-or-less 5-minute walk. En route, we are faced with a second surprise, but this time, not such a nice one. At the entrance (which also acts as an access point for the adjacent water park, the “Caribe Acquatic Park”) there is quite a significant queue. However, after about half an hour we manage even to overcome this particular obstacle and finally we reach the entrance.

Upon entering, the sight that greets our eyes is a vision straight from a fairy-tale: a huge river, bordered by rocks and thick, luxuriant vegetation which frames the whole Park, which then evolves into different themes the further you delve in to the park. There are Mediterranean, Polynesian, Chinese and Mexican themes all the way to the Wild West.

We decide to go straight in to the first ride: ‘Furious Baco’, a capsule which promises to simulate acceleration equivalent to that of a jet taking off. However, thanks to the information panels, placed at the entrance to each ride letting you know the waiting times, we realise that we would have to wait approximately one hour and 30 minutes, which causes us instead to head over to the following attraction, ‘Gran Canyon Rapids’. As you can easily guess from the name, this ride is an adventure through water rapids imitating those of the Grand Canyon, considered as ‘moderate’ on the signs next to each of the rides. We wait roughly 30 minutes, get on board and enjoy the ride. We were refreshed by the sprays of water which are sprayed from the obstacles throughout the duration of the ride.

Getting off the ride, we see an extremely tall tower, which is the symbol of ‘Hurakan Condor’. This time, the queue is practically non-existent, so we get straight on board and are lifted upwards to the top of the tower, to an altitude of 100 metres, hearts suddenly beating fast, and then…down! In 2 seconds flat we are already back to the ground. We make our way around the park and end up trying loads of the other rides, some of them really fun, others less so, but all of them giving the impression that, at least for the day, we had once again become kids.

The park is really crowded…everybody from families with kids; groups of elderly people, to groups of children all of which are in a general spirit of happiness. At times, the queues are rather long, but if you arm yourself with a good dose of patience (as well as the right kind of company), time flies by quickly, with comments exchanged between those in front of and behind you and by the time you get on the ride, they will have become your best friends!

The lunch break is a needed rest from the frenetic adventure, and this you can spend in one of the very numerous themed bars which are located inside the park, or in the shade of the palm trees which line the bank of the river. However, the prices aren’t the chepeast as it costs €4.50 for a sandwich and €4 for a coke for example.

It’s 6.30 p.m and we are tired, hungry but also very satisfied, and well in advance of the park’s closing time (from the 25th of May to the 26th of September the park closes at 8 p.m.). We head back to the strange station where we arrived this morning…just one hour’s journey and we will be back in the reality of our dear Barcelona and so….hasta luego!

Note: Reductions are available for groups and students, click here.

Opening times are subject to change so check out the official 2011 Timetable and seasonal opening times.

Click Here to find out how to get there