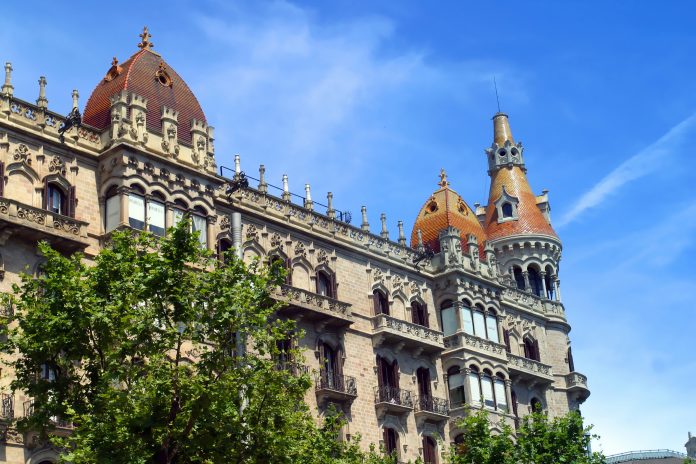 Last Saturday morning, I checked out Barcelona’s monuments in quite an unusual way. I had a rendezvous with Artchitectours, who specialise in visits to Barcelona from the perspective of architecture and art. Due to their specialised knowledge, their main clients are architects, alone or in groups, art schools and aficionados. But for me, someone not at all part of that world, I found the experience extremely interesting.

I did the Barcelona Vanguard tour. The meeting time was 09.30 in Plaza de Toros Monumental in Eixample. This was the first contact I made with the guide, who had completed part of his studies in France and therefore spoke very good French. We were awaiting a group of 20 architects (they have groups & guides in English, Spanish, French, German, Italian, Russian & Portuguese).

The first stop was the TNC (Teatre Nacional de Catalunya) near to Glories, a building made of glass, designed by the post-modernist architect Ricardo Bofill, which as of 1996 has been the setting for some of Barcelona’s larger cultural events. En-route, the guide explained to us the changes to the city caused by town planning, and most notably the drive to build everything facing the sea. The TNC is the symbol of this once-neglected area’s rehabilitation- a large open space has been built, to ‘make people want to open themselves up to the sea’, the guide explained.

Just next door, we headed to the building which houses the Auditorium as well as the Museum of Music, designed by Rafael Moneo and opened in 1999. It holds a large number of concerts, and is architecturally appealing thanks to the huge opening to the sky right in the middle of the building.

**Remember to take advantage of the 10% discount on all tours for Oh-Barcelona customers and view Barcelona from a different perspective. {What’s This?}

Afterwards, we continued on towards Jean Nouvel’s nearby Agbar tower. It’s one of Barcelona’s most famous monuments, and is occupied by the city’s water company. The little group of architects lingered over studying the façade of the building, the materials employed and the techniques utilised etc. And although it’s right next to my house, I never knew you could actually go inside! You are able to visit the ground floor, where there is an exposition about water. As you can see from the photos, the black walls contrast with all of the light that enters the building.

After 45 minutes at the Agbar tower, we got on the bus in order to go and visit the Forum, which is in the area of Poblenou. This huge square features a building with modern architecture, which should, according to its makers, be a place “of reflection and experimentation regarding the main cultural and social conflicts that humanity must confront”. The guide explained the history relating to the construction of the square and the changes made to this area of town, and then gave us information regarding the building itself, and particularly regarding the blue plaster, which was made using an entirely new method, making a very strong impression upon my companions for the day. It was also a chance for a little break and a few refreshments.

We left each other there, after this half-day excursion. The tour I did was initially entitled ‘Vanguard’, but was modified according to the group’s demands. Architectours is flexible with its visits, enabling you to get what you really want. The guide was competent and extremely friendly. She taught me a lot about Barcelona’s history, and we can discover much regarding the city’s philosophy through its changes in town planning.

I would advise you to visit their website and have a look at what else they have to offer.

To get the Oh-Barcelona 10% discount, please present the voucher from the Discount Card pack that is provided once you have booked your accommodation. {Terms & Conditions}

What do you know about architecture? Have you already done visits to other cities from this point of view?

Have a great night out with the Party Tour