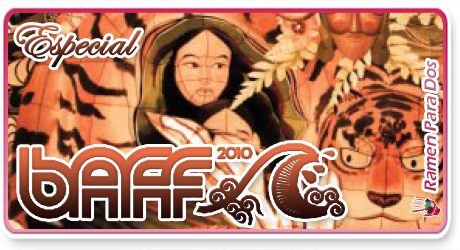 Who should read this article? For film lovers

Who said that good cinema only grows in the West? The 12th edition of the Barcelona Asian Film Festival is about to begin: the best of Eastern cinema (new and old) arrives in Spain with up to 70 films screened, six programs of short films and two new features.

The protagonists of this new edition will not only be from Japan and Korea but also the Philippines, Malaysia and Indonesia whose film markets are not as affirmed in Europe. In fact, this is just what the Festival aims to do, film or broadcast a copyright East in the West has yet to be discovered. The programming of this year has different sections:

The launch will be held on Friday 30th April at 20.30 at the Rex Cinema, with the Indian film Luck by chance, by the director Zoya Akhtar, an ironic self-criticism and sarcastic poke at the ways of the Bollywood industry.

One of the novelties of this twelfth edition BAFF, has been the creation of a film section devoted to South Korea: Due to the 60th anniversary of diplomatic relations between Spain and South Korea, the festival will screen nine films from major Korean directors thanks to the collaboration of KOFIC (Korean Film Council) including: Green fish of Lee Chang-dong, BAFF-winning director 2007, Memories of Murder, Bong Joon-hoo, which won three awards at the Festival of San Sebastian, The Coast guard by Ki-duk Kim, one of the most famous Korean directors in the Western world. Another new section will be devoted to the world of animation, which is set to be a great success: ANIME BAFF, a festival within a festival. It will take place on the first weekend of BAFF in the main Hall and the CCCB Auditorium which will be screening Japanese animation films, three of which are premieres in Spain, and one Piece Film: Strong Munehisa World of Sakai. Also presenting is the film, Summer Wars Mamoru Hosoda, one of the best animated films, which won the prize for best feature film at Sitges Anima’t section 2009. For more information see the schedule on the official website of BAFF 2010.

There will be projections in the hall and auditorium of the CCCB for all ANIME projections. Most of these are free!

Feature from all other sections of the festival will be screened in Cinemas:

Tickets for feature Films will have to be paid for and can be purchased at the box office as well as online. It is also possible to purchase tickets in packages, of 5 or 10 tickets: see the official page http://baff-bcn.org/es/entradas

All films are in their original version with subtitles in English and Castilian apart from Manila which only shows with Castilian subtitles. In many cases there are also subtitles in Catalan

Tips:
• We recommend you check the schedule on the website and purchase tickets in advance.
• Not all the projections of the CCCB ANIME section are free: we encourage you to look at the official site in the programming section.
• The seats are not numbered so it would be best to arrive early to make sure you get a good seat.