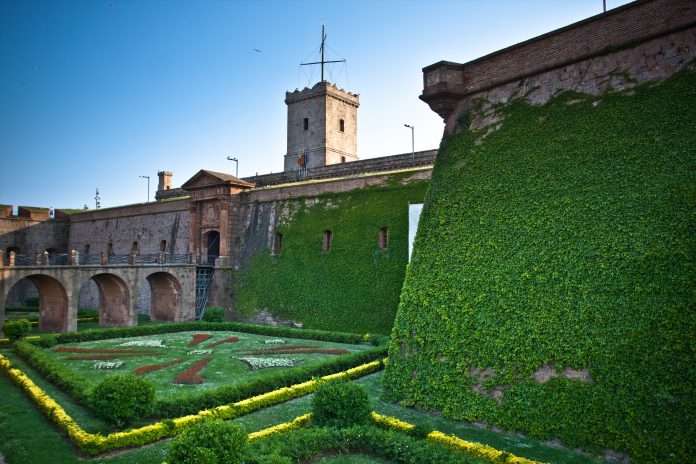 Psssst….Don’t tell anyone, but hidden on Montjuic is a chiringuito to which inhabitants of the frenetic, bustling Catalan capital betake themselves in order to hide away. What’s a chiringuito? A small construction, usually found within tourist areas, which open only for large events or for the summer season, where you can drink, eat and enjoy some good music in company. Barcelona holds many of them, along its beaches, so why is this one in particular so special? Well, because it is special, not touristy and, above all, shrouded in mystery.

How to get there

Managing to get to the Caseta de Migdia by means of public transport is pretty much like going on a treasure hunt. Our meeting place was Plaça Espanya. The first enigma to solve is which of the multitude of buses with Parc De Montjuic written on the front is the correct one to take and, more importantly, which is the right bus stop. The actual and only bus which stops within direct proximity to the castle doesn’t have a number, but instead shows ‘Parc de Montjuic’ in blocked letters and picks up and drops off at a bus stop which is hidden between the two Venetian Towers. You’ve been warned, accept no imitators!

The bus wasn’t quite completely empty, and after about 15 minutes, after having passed the Caixa Forum, the Poble Espanyol and the Area Olimpica, we get to the castle. Before getting off, we ask for the whereabouts of the Mirador de Migdia. The driver indicates to us a small road to be followed right to the end.

We begin to walk down the path indicated to us, feeling progressively uneasy due to the fact there wasn’t a living soul and it was beginning to get chilly. Eventually we find a guy out jogging, but he only speaks Russian; then a pair of tourists; and a couple out walking their dogs. The couple actually come to be our guides, telling us which route to take every time there’s a fork in the road.

After about a 15-20 minute walk, just when we were beginning to think that the caseta was either a myth or a hermit’s cave, in front of us appears a breathtaking sight. The pink of the sky has given way to an intense blue and thousands of lights, as if we had been transported a million miles away from Barcelona. Amongst the trees, we spot a little house, from which the sound of music is emerging. Getting closer, we realise

that many of the tables are occupied by groups of friends, who, between snippets of conversation quaff drinks, chilled out with good music mixed by the DJ. To our great surprise, the waiter tells us that all of the many tables were booked up already!

Fortunately, a couple are just leaving their table. We glance around inside the tiny caseta, only to see a huge amount of people waiting in line.

Have a look at the youtube video below to get a feeling of the atmosphere of this special place.

Don’t ask for it, because it doesn’t exist! They explain to us that everything offered here is very simple. No sophisticated cocktails- just beer, wine and non-alcoholic drinks. They don’t serve tapas, but instead only crisps, olives and nuts. A menu isn’t on offer, because they serve simply a mixed platter, the only dish here which consists of grilled chicken, salad, bread, corn-on-the-cob and butifarra, a typical Catalan sausage. This speciality is produced in limited numbers, only 130-150 dishes per night. Those arriving late run the risk of going away empty handed. If you do want something else there are two guys, who are subsidized by La Caseta, selling sweet and savoury crepes, cous cous, paella, brownies and tortilla.

We decide to try Corazas, a Spanish white wine, which comes served in plastic cups, and to accompany it some nuts and crisps, which come already in the bag, in order to give us time to decide whether we want to order something else. The atmosphere is nice and relaxing, and it seems like we’re in another world, where the chaos and frenzy of urban life do not exist. Time flies, and even though the dishes look incredibly inviting, you have to wait at least half an hour in order to get something hot to eat. Unfortunately, it’s getting late, and given that there aren’t any buses for getting back to town, we decide to take a taxi.

At the till, we pay 4 euros per head for the glass of wine and the snacks and we ask for a taxi. We’re informed that normally even if you call for them they don’t come. Instead of a paradise within chaotic Barcelona, at that moment it begins to seem more like an absurd nightmare. Luckily, a guy comes to the rescue, providing us with the number for a taxi company that also covers this area. We call, and at last are able to draw a sigh of relief, happy to be back in frenetic Barcelona.

How to get there

It’s not the easiest place to find but that’s what adds to its charm.
Bus: 150 up Montjuic until the stop Castell de Montjuic. From there you have to walk up the hill, follow signs for “Mirador de Migdia” and “zona d’oci i esbarjo”.
N.B. Given the scarce connections, especially during the evening, it is advisable to use your own transport to get there. There is free parking at the Caseta.